In the middle of the night, my 3 year old son started screaming, “No, No, No.” After waking from a nightmare, he was inconsolable. “I want something,” he babbled for half an hour. Water, blankets, stuffed animals, Mommy–nothing could make him stop crying. In my half-awake state, I realized that he was teaching me about  Buddhism. 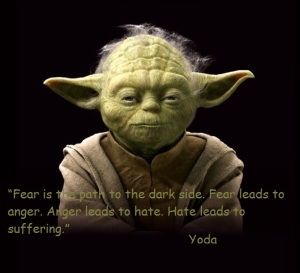 In his first teaching after enlightenment, the Buddha explained the Four Noble Truths. The First Noble Truth states that all life is suffering. The Second Noble Truth explains that suffering is caused by craving conditioned by ignorance. Obviously, my son was suffering because he was craving something. The last two noble truths are about how to end suffering by eradicating craving and ignorance.

The realization my son taught me is that cravings and ignorance are often attached to fear. This gives us a more central root of suffering that we can dig up on our way to peace of mind. If we excavate the fear, we can often eliminate a number of cravings all at once.

“Where there is charity and wisdom, there is neither fear nor ignorance.“~St. Francis de Assisi

As an example, I’ve listed some of my fears, the related cravings/desires, and the wisdom I’m using to release the fear.

Maybe this realization is obvious to others, but I feel better equipped to tackle my fears and cravings using this chart.

“All of my teachings can be put in a single sentence. ‘Nothing is to be clung to as I, me, or mine.’” ~The Buddha

What are your fears? How would you fill out the chart? Please share.