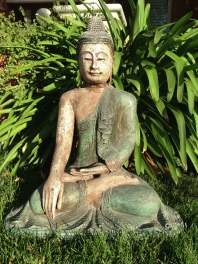 “The saints of God dare to be ordinary.”–Hugh Prather

A friend of mine who owned an import/export shop gave me a large Buddha statue that had been damaged irreparably in shipping. Like everything else I receive for free, I didn’t give it much thought. When I was forced to live in my car, I left the statue with my mother who placed it on her front porch in the wind and rain like an Asian garden gnome. Years later, this battered moss covered Buddha became one of my prized possessions. Although my wife and I own other Buddha statues, this broken Buddha is still my favorite.

For me this faded sea green Buddha reminds me of the real Shakyamuni Buddha. Although many depictions of the Awakened One are artistically crafted in gold, we often forget that Siddhartha Gautama was a broken man right before he attained enlightenment. A former prince, Siddhartha abandoned his wife and newborn son to pursue a spiritual life as an ascetic.

After six years of mortifying the flesh including eating only one grain of rice a day, drinking his own urine, and fiercely meditating every waking hour, Siddhartha accepted a meal of rice pudding from a young maid, much to the consternation of his fellow ascetics. Imagine the bitter taste of failure that accompanied this fast breaking meal. This was right before he sat under the Bodhi tree and attained enlightenment.

I try to remember this when I’m picking through the pieces of my shattered life. Rock bottom provides a solid foundation to propel us into a higher consciousness.

The tattered statue also reminds me of another story about the Buddha that occurred after he became the Enlightened One. Upon hearing the news that the men, women, and children of his former kingdom had been massacred, the Buddha became sad. The Awakened One fell back into the suffering of samsara. This reminds me that mindfulness is a moment-by-moment practice. There is no perfect state free of change, transience, or impermanence, even if we attain enlightenment. Happiness ends, loved ones die, statues break. Enjoy the perfection of this moment for it is all we have.

What objects remind you of your spiritual practice? Please share.