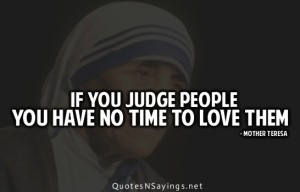 This post is in response the Daily Post Weekly Writing Challenge: “tell us about a moment when your life changed in a split second.”

In my younger days, if I were at the trial of Jesus, I would have probably voted with the rest of the crowd to crucify him. I used to be such a judgmental and closed minded person, which is probably why in 1999 all my traveling companions abandoned me in Sri Lanka, a small island formerly known as the Island of Serendipity off the southern coast of India.

Luckily, right before they abandoned me I had just finished a week long meditation retreat; otherwise, I might have struck them down “with great vengeance and furious anger” Pulp Fiction style. At the retreat an experienced meditator whom other guests called the “sitting one” said that I needed to go to India to get a hug from a guru named Amma.

“My traveling partners wouldn’t even come to this retreat; there is no way they will agree to go to India to see a hugging guru,” I whined to the “sitting one.”

He didn’t say another word, but on the day of my departure from the retreat, he handed me a slip of paper with the full name of the guru and the village where her ashram was located.

When I got back to the coast of Sri Lanka to meet up with my fellow travelers, I found a note attached to my belongings that were piled in the middle of the guesthouse where we had been staying. The note said that everyone was headed for the airport without me. Since I was on the Island of Serendipity, I treated this as a happy accident and booked a flight to India.

Three weeks later, standing in a snaking queue for over 2 hours in the heat of Mumbai (formerly known as Bombay), I began to doubt the advice of the “sitting one.” The entire concrete auditorium I was waiting to enter was covered with huge posters of a rotund smiling Indian woman. Vendors packed the streets outside the hall selling pictures, pamphlets, stickers, and even dolls of “the embodiment of Divine Motherly love.” It felt more like an Indian version of a Grateful Dead show than a meeting with a wise lone sage on a mountain top.

When I finally got to the front of the line, however, I knew that I had made the right decision. Amma stared at me like a childhood best friend that she hadn’t seen since the first grade. I almost looked behind me to see whom she was looking at. The beautiful saint dressed in all white wrapped her arms around me and, cheek to cheek, chanted something in my ear. This is when I lost track of time. Maybe it was from the heat or the 4 hours of waiting, but I lost consciousness resting on the soft silk sari draped over Amma’s shoulder.

When the attendants pulled me off, I had no idea if I had been hugged for 10 minutes or 10 seconds. Half dazed, I reached out to take the “vibhuti”–sacred ash–and candy treats that Amma handed each person she hugged. Amma gripped my hand and pulled me back as I attempted to exit with the rest of the post-hug devotees. At that moment, I thought I had done something sacrilegious. Amma spun me around and handed me off to an attendant in a bright orange robe who, at the request of Amma, lead me onto the stage behind the guru where the swamis, attendants, and musicians were sitting.

Since I was the only person on the stage in Western clothing, I had no idea what I was supposed to be doing up there. As I sat behind Amma on the raised stage, I watched as throngs of Indians elbowed their way up to the front of the queue. I could see the line of people stretching the whole length of the hall, out the door, past the entryway, and into the street. Suddenly, a troublesome thought popped into my mind: Had I been recruited to be a lifelong disciple of this guru? While I was contemplating whether I could make such a huge commitment, I noticed a disturbance in the crowd.

Some policemen dressed in their brown uniforms had pushed their way to the front of the line. Although the other Indians who had been waiting for hours looked pretty upset that these officers were abusing their role as policemen, no one seemed to have the power to do anything about this injustice. I was going to tell one of the attendants when I realized that Amma was a guru. It is said that gurus can not only see all of your life in one glance, but also all of your past lives and karma as well. Amma would know that these officers had abused their power. She would send them back to the end of the line. I could not wait to see the look on the police officers’ faces when Amma refused to hug them because they were not worthy.

As soon as Amma saw the policemen, she smiled. I knew that she sensed what had happened. Then to my amazement, Amma took each officer and gave him a big long hug. I could not believe my eyes. Then it dawned on me. Amma is the embodiment of unconditional love. Unconditional love means that you love others regardless of what they have done, what they look like, how they smell, or what Gods they worship. You do not reject anyone if you love unconditionally. Like many of our mothers who love us in any shape or form, Amma accepts us with open arms just as we are.

I smiled when I finally realized what unconditional love was. At that very instant, Amma turned around, looked me straight in the eyes, and smiled deeply. She then pulled an attendant aside and whispered something into his ear. The attendant approached me and said, “Amma says you can go now.”

What event rocked your world and affects you to this day? Please share.