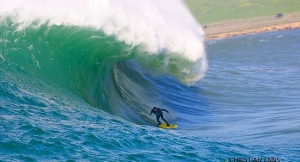 Christian Enns was one of the surfers featured in Imagine: Surfing as Sadhana. As you can see Christian charges huge waves. He is also a very talented artist. While we were traveling together, Christian was reading Jules Verne’s classic Around the World in 80 Days. In the novel, Phileas Fogg, the protagonist, bets half his net worth that he can circumnavigate the globe in 80 days or less. Although Fogg is in a monumental race against time, he never runs nor rushes during his entire journey. Christian wanted to emulate this character, so he decided that he would neither run nor rush while traveling. The problem was that Christian tested his new theory on a day when we were late for our flight out of Morocco. So while I ran around like an ant who had lost its trail, lugging huge surfboard bags that were twice my size, Christian moseyed through the crowded halls of Mohamed V International Airport as if he were strolling down the beach looking for sand dollars.

After cursing my way through security, I sprinted toward what seemed like the most remote gate in the airport. Sweating like a pig, I panicked when I realized that it was 5 minutes past the departure time. Christian sauntered up to the gate 5 minutes after I arrived, but neither of us missed the flight. It turned out that the flight was delayed 1 hour.

I was so pissed that I had done everything humanly possible to make the flight, while Christian had done everything humanly possible to miss the flight, and we were both stuck in the same waiting room together. Both Christian Enns and Around the World in 80 Days were everyday gurus that day. They were both trying to teach me peace of mind, equanimity, and faith. Traveling, even domestically, offers so many opportunities for spiritual growth. You don’t need to go all the way to India to find a guru. Sometimes they are lying in our briefcase begging to be read. Other times they are standing right next to us while we cut in front of them in order to stuff our over-sized carry-on in the last over-head compartment on an over-booked red-eye to SFO.

Feel free to share your travel experiences. Do you find that stressing and rushing cause further delays, while calmness and courtesy take us to wonderful destinations even though they are not on our itinerary?